After much research and exploration for Wired Magazine’s brand standards, I was able to identify the typefaces that are in use. The nameplate is in Tungsten and can be found on Hoefler & Co. The body copy is in Exchange and can be found on Adobe fonts. For headlines, Wired uses The New Grotesque family from A2 Type. Headlines and pull quotes can also be found in Noe Display by Schick Toikka, as well as the slab-serif Blakey-narrow,created by Matt Willey, and lastly Brutal, which was made by Russian Brownfox foundry. There is a lot of variety within Wired’s type choices, but they all somehow coexist very nicely throughout the spreads. In an interview with Andrew Diprose, the creative director for the UK Wired, he described why he chose to have such a versatile selection of display typefaces. New Grotesque and Blakey are able to run large because of their narrow features, while Noe Display and Brutal offer a clean, modern, and geometric feel.

These typefaces work very well together and they’re just the right mix of quirky and modern. Since this is a technology and business magazine, I think it works very well with their overall brand. The typefaces are wide and can take up large portions of the spreads without being awkward. Noe Display is used quite a bit as pull quotes or subtitles, having a prominent spot on the page that will draw the reader’s eye immediately. It is often paired with a sans serif body type that I was unable to locate. Because of the thin strokes in Noe Display, it works really well with this thin sans serif. Many times this type is placed in a way so that it runs into the image on the page. This is a common use of type throughout the magazine. I think this is a great way to direct the reader from the photo to the title of the article, since typically the photo is the first element readers notice on a page. The headlines all share the same formatting on the page whether or not they change between the various type choices available. When the display type is large, it typically means it is a headline, while it is shown in a smaller size when it is used as a pull quote. Most of the captions throughout the magazine are displayed in one of the sans serif type choices.

I think that these type choices work very well together for Wired. Because of their tech-business audience, they keep it light with more modern type as well as serif choices that still give a professional feel to the content. The variety of type keeps the content interesting as well. Seeing different information in a variety of type makes the reader want to continue and it creates more movement throughout the spreads.

This is a technology and business magazine. With the title “Wired” I think it works really well because it alludes to technology while also using a word that can mean being connected. This is also a good title for the magazine because it is a little more fun than just “BusTech” or something like that, and it goes along well with their overall brand with the bright colors and various typefaces. The type of headlines they use are witty and work very will with the content that is being provided. A few examples are “Putting a lid on oil spills, “Keeping AI Honest,” and “Flash dance: drones that are clever, flock together.” They are typically a few words long in title case and stacked into three to four lines. Typically they are set off to the right in a section of white space, but can also be found in the center above articles. The phrase that is used gives the reader an idea of what the article is talking about, without summarizing. Underneath the headline there are cutlines that give a little more of a direct answer to what the reader will be reading in the article. They are typically just one sentence, taking up two lines. The captions are typically on the photographs in smaller type than the body copy. Pull quotes are used often to bring variety to the spreads. Many times you can see pull quotes either in black or the accent color that is being used throughout the story. They are always followed by an attribute and center aligned with a heavier weight for the name and lighter one for the job title. The bylines and credit lines are worded pretty similarly. The use “words by” for the writer of the article and “Photography by” for the photography, and so on for illustration and design. I think this is a good approach for Wired because it is straightforward and doesn’t require a lot of space. The section titles are “Start,” “Event,” “Gear,” “WS Special,” and “Feature.” I think these are good section titles, but it’s hard to know what exactly they mean. They are intriguing though and different from other publications. They make me want to find out what they mean. 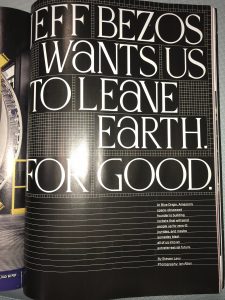 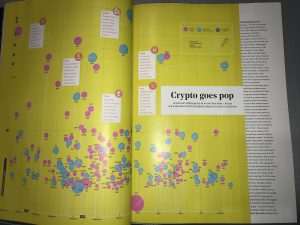 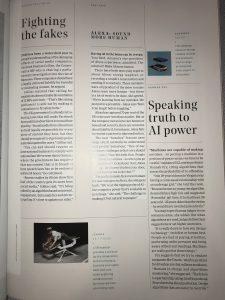 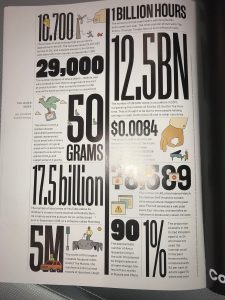